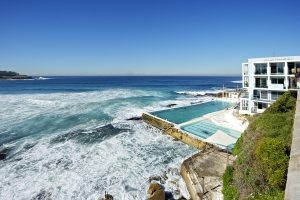 Real Estate & Design in Bondi Beach – A vibrant residential beachside suburb of Sydney with californian bungalows, terraces and mid-rise apartment blocks mixed punctuated with stylish new builds. Despite the activity on the foreshore, it is a relatively quiet suburb and the precinct behind Campbell parade is highly sought after. There is a wide range of accommodation in Bondi. There are holiday apartments and holiday homes close to Bondi Beach

Things to do in Bondi Beach
Catch a wave at Bondi Beach. Shop at Bondi Junction. Walk to Coogee along the cliff tops. Chill in one of dozens of cool cafes. Get healthy in the organic food shops. Dine at Icebergs. There is plenty to do in Bondi

History of Bondi Beach
Bondi’s bawdy beach culture stretching from Victorian times to today can be recounted by the many lifelong residents of the suburb. Each day new international arrivals make Bondi their temporary home but the population of Bondi remains around 30,800

Shopping in Bondi Beach
Campbell Parade’s is lined with surf clothing shops and eateries. But more daily shopping needs are met by the local shops in the streets away from the shore. There is also a cinema and numerous professional services

Restaurants & Cafes in Bondi Beach
During the day, there are many relaxed beach cafes to choose between on Campbell’s Parade and at the beachside Pavillion. Many of these cafes turn into equally busy eateries at night. Bondi Road and Bondi Junction offer a range of live music and late night entertainment. The Eastern Suburbs/Sydney Swans Leagues Club is also a popular venue

Sports & Fitness in Bondi Beach
The beach is the obvious focus of Bondi’s favourite sporting activities- swimming and surfing. Lap swimmers can try the Bondi Icebergs swimming pool. There is also a Golf Club on the heights overlooking the ocean at William’s Park. The suburb hosts sporting events such as the Festival of the Winds (kite-flying) and the beach is the finish line of the annual City to Surf fun run

Transport in Bondi Beach
Frequent buses run from the CBD and surrounding suburbs and City Rail trains from the city, which link with other suburban services at Central Station. The beach area is easily accessed via Syd Einfeld Drive and is well serviced by local taxi companies