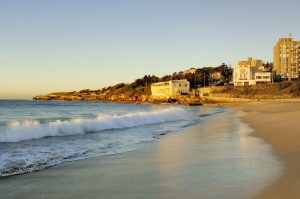 Things to do in Coogee
It’s all about the beach in Coogee. There are great restaurants as well as shops on Coogee Bay Road. Walk to Bondi or Bronte

History of Coogee
Coogee was originally settled by the wealthy as a retreat from the City. It became a fashionable seaside resort in the early 1900s with the opening of an Aquarium & an ocean pier in 1928. In the 1980s, the Council undertook an ambitious re-development of the seafront. A Holiday Inn Hotel was opened & the Coogee Bay Hotel refurbished to cater for thousands of new, now international visitors that visit Coogee each year

Landmark in Coogee
The most obvious landmark & useful meeting point is the Coogee Bay Hotel. Wylies Baths, originally built in 1907 out of the sandstone cliffs at the south end of the beach have been refurbished recently

Transport in Coogee
There are regular buses from the CBD. Some buses terminate at Coogee Beach. There is also a service from Sydney Airport & Bondi Junction Railway/ Bus Exchange. There is also a route that operates from Annandale to Coogee Beach – linking Coogee with the University of NSW, Sydney University, Prince of Wales Hospital & Sydney Children’s Hospital Randwick, The Royal Prince Alfred Hospital Camperdown, & the newly opened Green Square Railway

Distance to the City from Coogee
7 Km & Minutes by Taxi

Schools, Institutions, Hospitals in Coogee
Randwick Prince of Wales Hospital is nearby & the Spot in Randwick has a cinema & great restaurants as well