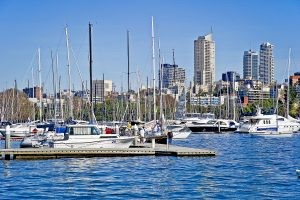 Real Estate & Design in Darling Point – The residents of Darling Point take great pride in maintaining the mansions, grand terraces & elegant apartment buildings of the suburb. The trees & shrubs are mature & although & it almost makes it as an inner city suburb, the City feels a world away. There are also many tasteful contemporary duplex & townhouse developments. Some accommodation offers stunning views across the harbour to the Sydney City skyline. Woollahra is a nearby suburb with similar style holiday homes & furnished apartments

Originally named Mrs Darlings Point after the wife of the then Governor, the suburbs illustrious history began in the 1830s when the road east from the city, New South Head Road, was completed. Sydney’s society leaders moved into the numerous grand homes that sprang up. Post world war two elegant apartment buildings were built to take advantage of the postcard harbour views

Most recently, the Olympic sailing headquarters & the Cruising Yacht Club of Australia have become famous as the starting point for the Sydney to Hobart yacht race

There is a tiny local store for daily staples & many more shops at Double Bay, where you will find a supermarket, clothing, antique & general services or in the Edgecliff Centre, which also has a fine deli & supermarket

The Cruising Yacht Club is the only restaurant venue in Darling Point, however nearby Double Bay, Woollahra, Paddington or Potts Point offer some of Sydney’s best dining & cafes

The women’s only ‘Temple of Body and Soul’ & ‘Regenesis’ Gyms are nearby, as are the tennis courts of White City.

Darling Point is well connected to the City via Edgecliff train station. New South Head Road also has many buses & there is a regular ferry service from McKell Park to Circular Quay

Distance to the City from Darling Point