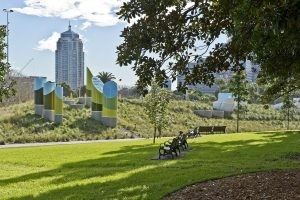 Surry Hills was named after the Surrey Hills in Surrey, England. It was once a beautiful farming area, owned by Major Joseph Foveaux (1765-1846). His property was known as Surry Hills Farm & Foveaux Street is named in his honour. The Devonshire Street cemetery, where many of the early settlers were buried, was moved to build the Sydney railway terminus. Central railway station was opened on the 4th August 1906. The area around Cleveland & Elizabeth streets was known as Strawberry Hills. Strawberry Hills post office was located at this intersection for many years

The focus of Surry Hills shopping, busy Crown Street is popular for its off beat clothing homewares & collectables, bookshops & food stores. On the first Saturday of every month, the Surry Hills Market is held at Shannon Reserve, and this is a great place to find clothing gifts, creative crafts & bric-a-brac

Once again Crown Street is the place to go, particularly when it crosses Oxford, Fitzroy, Devonshire & Cleveland Streets. There is an extraordinary range of eateries here – from tiny Lebanese and Turkish takeaways to upmarket Modern Australian restaurants & some excellent pub dining rooms, such as the Dolphin, Clock & Hopetoun, offering meals at very reasonable prices.