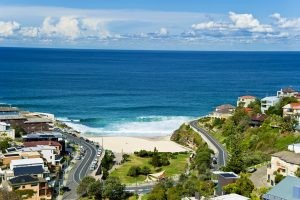 Real Estate & Design in Tamarama – Tamarama is an interesting mix of older-style, sun-drenched apartments & modern houses with an emphasis on outdoor living. There’s an air of hippy-chic & plenty of properties offer sensational views across the ocean. In any case, one is guaranteed to be just a short walk to the beach from your accommodation

Things to do in Tamarama

Take a swim at Tamarama or walk to Bondi, Bronte, Clovelly or Coogee Beaches. Sip cafe with the cool locals or admire the view from your apartment

Perhaps because of its unpredictable surf, Tamarama was once home to other tourist attractions. Firstly an aquarium, with complex housing a shooting gallery, dance hall & an ice-skating rink & in 1906, a replacement called ‘Wonderland City’, which was modelled on Coney Island. By 1911, it had also closed & the surf culture took over. Today the beach is referred to as ‘Glamarama’ for the beautiful people that have made it their own

Bondi Road has food from around the world. Ranging from Thai, Italian & Greek to Jewish & European or just a straight up burger or fish & chips. At Bondi Beach, you get food with a view at Hugos, Seans Panorama, Fu Manchu, Raw Bar, Jones & the ever-popular Lamrock. Sydney’s cafe culture is alive at Speedos, Aqua Bar or Aroma to Go. A 10 minute walk, south of Tamarama is Bronte with good breakfast cafes, dinner at Memento or fish and chips from the famous Bronte Chippa

Behind the beach is a grassy picnic area & playground. It is small compared to the Park at Bronte but big enough to play frisbee or kick a ball. The cliff-top walk to either Bondi or Bronte is popular with walkers & runners. Bronte Park has a modern playground & the very popular chuffing train for the kids

Distance to the City from Tamarama